The photograph you see is the “Editorial without Words”, now commonly called the Silent Messenger. This is a 1970 photograph taken at a Shriner’s picnic in Evansville, Indiana for medically challenged children. The photo captured a Shriner, Al Hortman, who stooped down and picked up, 5 year old Bobbi Jo Wright, along with her crutches, and carried her across a gravel parking lot.

Bobbi Jo was born with cerebral palsy, resulting in several orthopedic problems and multiple surgeries in a Shrine Hospital. The photo is brought to ‘life’ with statues reflecting the Shriner carrying a child. It symbolizes the Shriners mission and dedication to help children in need, and sits outside the 22 Shriner’s Hospitals throughout the United States and Mexico. Not including the 25 placed within our community.

The Silent Messenger stands as a lasting representation of the commitment that Kosair Charities has for our community and the children in Kentucky and Southern Indiana. These statues are strategically placed to denote those who carry our mission as well as received significant support from Kosair Charities. 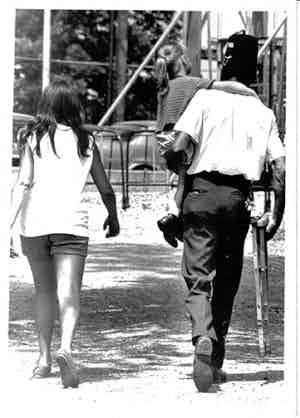 Silent messengers are currently displayed in the following locations (listed by campuses then alphabetically):