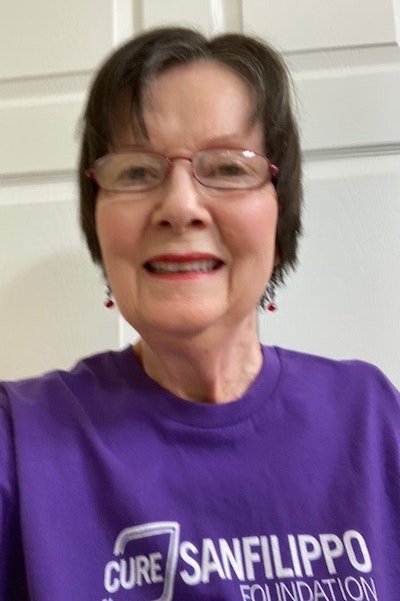 Sharon was diagnosed with polio at 10 days old. As a child, she spent a considerable amount of time at Kosair Crippled Children Hospital (KCCH) receiving medical care and therapy. Over the course of 10 years, she endured seven surgeries and multiple inpatient stays. KCCH became a second home and the nurses and staff became Sharon’s extended family. While Sharon’s last surgery was at age 13, she received outpatient care at KCCH until she was 18.

Sharon has dedicated much of her life to giving back to Kosair Charities in appreciation of the care she received and in honor of her parents, who gave up so much to ensure she had the best care possible.

As a teen, Sharon was a candy striper at KCCH and she continued to serve in many volunteer roles at Kosair Charities as an adult. Volunteering at the front desk, representing Kosair Charities at speaking engagements, and collecting books for kids are just a few ways she has supported children. Sharon has been a passionate volunteer, advocate, donor, and friend to Kosair Charities.

Most recently, Sharon befriended the mom of a current Kosair Kid. After Sharon reached out upon hearing the family’s story, she kept in touch and even shared in birthday celebrations. As Sharon often says, “I am just one of countless children whose lives have been changed by Kosair Charities. Gratitude is the prevailing thought among us and our families.”

Sharon recently retired from volunteering, but she will always hold a special place in the hearts of staff, Board members, and families whose lives she has touched. We are thankful to have Sharon as a part of our family!