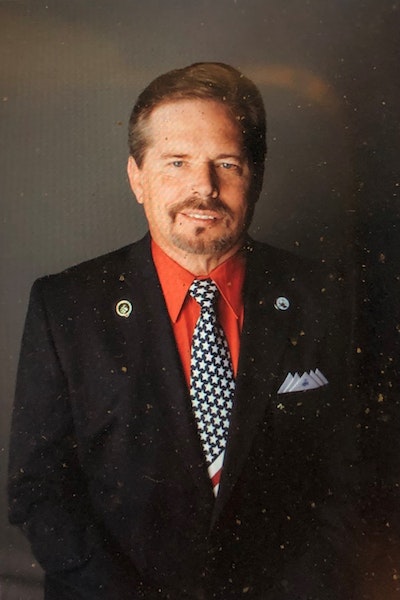 Rick Webb, Jr.’s story of his path from Kosair Crippled Children’s Hospital to business owner, Mason, Shriner, and even dancer starts – well - at home. Rick’s mom was instrumental in his journey, even part of his Shrine ceremony, and his father taught him long before joining about masonic values. Enjoy reading this brief story about Rick’s past, present, and future which mimics that of the organizations he cherishes.

Born on June 25, 1963, Rick was nearly 1 year old when it was noticed that his legs curved outward at the knee making learning to walk difficult, a trait a relative also had. His parents, just 15 and 17 when they married and children shortly after, were just getting on their feet and unsure where to turn. Thankfully, a church member referred his mother to Kosair Crippled Children’s Hospital. At age 3, Rick was fitted with custom leg braces. Doctors showed him proper foot positioning when he walked, and after 6 months in braces has walked normally ever since. He’s since followed in the footsteps of those that founded that hospital.

Rick is not the only Kosair Kid in his family. In 1965, Rick’s brother Kevin was born. His mother developed   rubella while pregnant, causing development delays in his spine and brain. Kevin has been diagnosed with cerebral palsy, scoliosis, heart murmurs, and is legally deaf and blind. Kosair Crippled Children’s Hospital ensured his family never paid a thing while Kevin received care – from transportation, food, lodging and multiple surgeries. Kevin took his first steps at the hospital, recorded by the staff. “Kosair Charities was a god send,” Rick said. “They stepped in and did what needed to be done for Kevin and our family, just like they did for me.”

“The biggest memory that stands out to me as a child was the huge hospital sign out front. I remember standing in my leg braces, running my fingers along the sign letters.” That same sign now greets guests in the lobby of the Kosair Charities main Eastern Parkway campus.

Rick KNEW he wanted to be a Shriner, ‘one of those great guys that helped my family’ as he put it. By chance, Rick purchased a building on Dixie Highway for his auto-upholstery business, immediately next to Valley Masonic Lodge. “I noticed they were all really great guys, always there to help me and my business in any way possible. I was impressed by that.” Individuals have to ask, not be asked, to be a Mason. Rick did not know one has to be a Mason before a Shriner. In early 2016, Rick became a Mason, soon after joined the Scottish Rite, and immediately after went through ceremonial to join the Shrine. “I knew my mom had to be a part of this process, so at my Shrine ceremonial, she was the one who placed the fez on me. That was very special,” said Rick.

“My dad has never been a mason or Shriner, however, I compare him to the best Mason I’ve ever known. His morals and standards have been there his entire life. He taught me to be a mason before I ever knew what that was.”  In my life it is God – Family – Masonry and that was the same qualities for his father, but his masonry was being honest, upright, and forthcoming.

Dancing into the Future

Since becoming district deputy grand master for district 12, Rick has had the opportunity to visit countless lodges and speak about how to become a Shriner, and a better Mason. Recently, Potentate Robert Hart discussed with Rick ways to increase outside visitors other than nobles coming to the Shrine Center, and Rick knew just the way.

An avid dancer (you name the style dance and chances are Rick is familiar with it), Rick went to work putting programming together to draw the public in and show them what Masons and Shriners had to offer. Line dancing began on Tuesday nights, Karaoke on Thursdays, and square dancing and ballroom dancing are in the works for Monday and Wednesdays. “I’m trying to get non-Masons and Shriners in the room each weekday to have fun and educate them on what we are all about.” It is working – 9 men are in the process of becoming masons and two to becoming Shriners.

So, what’s next? The extension into the future is Kosair Charities, the original Kosair Crippled Children’s Hospital, which became a philanthropic granting agency in the 1980’s. It is time to come full circle and connect the Masons and Shriners Rick loves so much, with the organization that started it all.