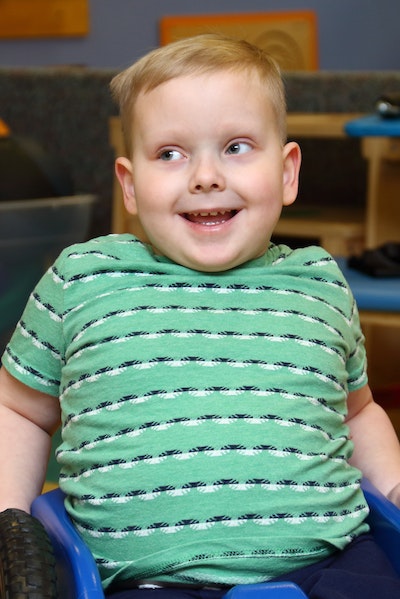 Henry was born with the spinal defects spina bifida and Chiari II malformation, as well as hydrocephalus, a buildup of fluid in the brain. Henry is no stranger to Kosair Charities and our supported agencies. Besides Spina Bifida Association of Kentucky, he also receives therapy at The Kids Center for Pediatric Therapies, and has received financial assistance through the Kosair Kids® Program.

In 2015, Henry received a ZipZac, a small, lightweight, mini wheelchair that is closer to the ground, through the Kosair Kid® Program. Henry’s ZipZac wasn’t covered by insurance, and was too costly for the Hinson’s to afford on their own, but thanks to Kosair Charities donors, Henry received this tool to increase his mobility.

The morning of Dec. 12, 2017, a water main ruptured in the night in Louisville’s Shelby Park neighborhood and the Hinson’s woke up to find their home surrounded by water. The Hinson’s house had minimal damage, but Henry’s ZipZac was in the back of the family van, which was destroyed in the flood. Henry didn’t have time to wait for a new ZipZac, so Erin called Kosair Charities. Thanks to the Kosair Kids® Program, Henry had his new ZipZac on Dec. 19, just one week after the flood.

The Hinsons are thankful to Kosair Charities donors. Erin said, “It’s an amazing thing to have Kosair Charities in our community in general, but because of the generosity of so many, Kosair Charities is able to act quickly and intercede in times of crisis when families are dealing with the unexpected.”

We want to continue helping kids like Henry in times of crisis, but we need your help to do so. Make a gift today!

Read more about Kosair Kid® Henry in the Spring 2018 Edition of Kite Tales.