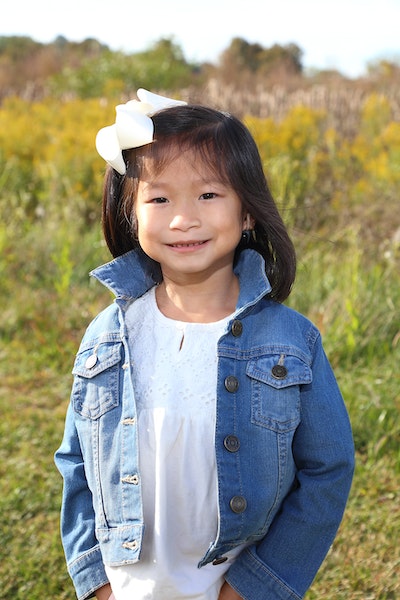 Ellie Kate became a member of the Cook Family in 2013 at the age of 20 months old. Ellie Kate was profoundly deaf when she was matched with her parents, Kenny and Jana Cook. The Cooks spent the months leading up to the adoption learning everything they could about raising a child with hearing loss. They worked with speech therapists, developmental interventionists, and audiologists before they even got to meet their baby girl.

Ellie Kate was severely delayed across the board due to her hearing loss and spending her first 20 months in an orphanage. She only weighed 13 pounds, was not talking, was barely able to sit up, and was taking nothing but bottles. She had her first appointment at Heuser Hearing Institute, a Kosair Charities supported agency, just one month after getting to her forever home.

Ellie Kate started her journey at Heuser in the Early Intervention program, First Steps. Through First Steps Ellie Kate received occupational therapy and quickly realized food was delicious and learned how to chew and swallow solid foods. She also learned how to crawl, cruise, walk, and run all before her 2nd birthday.

On December 23rd, 2013, Ellie Kate received her first cochlear implant, and turned on the receptor January 3rd, 2014 allowing Ellie Kate to hear for the first time. She had never heard sound before and had to be taught how to listen and respond. Once she grasped responding to sounds, they began introducing new sounds and words to attempt get her talking.

One year after Ellie Kate’s first cochlear implant, she had her left ear done as well. At the age of 3 years and 3 months, Ellie Kate was able to experience surround sound hearing for the first time. Since the second implant, Ellie Kate’s language and listening has increased tremendously. Her speech is still very delayed, but she has made mass improvements.

Jana said that having a child who is deaf is the easiest hard thing she has ever done. Now that the Cook’s have a support system in place, thanks in large part to Heuser Hearing Institute, they are ready to welcome another Kosair Kid® into their family and face any challenges together.

Learn more about Ellie Kate in the Fall 2017 Edition of Kite Tales.